In a wooden drawer in my bedroom is a small pile of notebooks full of half-formed ideas or near-complete short stories that got the better of me. I’m positive that each time I sat down with these ideas I promised them something beyond completion, promised redrafting until I could take them no further, and then there would have been a promise to submit to a journal or a competition or maybe collect them like small sticks and present them to my agent as a surprise starter for a bonfire. What a side project they could be.

But it’s rare I see any of these to completion. I used to think my wandering mind was to blame, all that boredom that eventually came from sticking to a smaller world. I used to think it was laziness. Or maybe it was guilt for most often than not, when I write these short pieces, I am at the beginning, the middle, the endlessness, of a manuscript that should have the priority. And so the story is stopped, a character dies, and the notebook goes back into the dark and before I close the drawer I tell the story, ‘I hope you’re still here when I eventually come back to you.’

Over the years it’s occurred to me me that all these half-formed things are practice runs, perhaps even small bricks that may one day form the side wall of a paper and ink house. It’s occurred to me that these incompletes, these small rejections of ideas, are necessary for something bigger to be born.

The last short story I remember writing was about John, a teenaged farm boy sold by his parents to a travelling competitive eating side-show so that they could use the money from the sale of their son to save the family farm. John travels around vast country lands on a tractor. There are hopes he would return to them but he dies during a competition and the story ends. I can’t express enough how married to this story I was: I loved writing it. I almost finished an entire draft of it in a few days. And yet. I had begun work on the structural edit of See What I Have Done and so I put it away, the guilt strong, and that was the end of John.

Tonight as I sat down to work on my current manuscript, the farm boy crept through my mind. Was it possible he was still here? I went to my drawer. And sure enough:

John saw colour: blue the sky, black that crow; the yellow silk eye. Green tree leaves. Landscapes: altered gaits of men, some with mushroom-grey skin, others with bowl-cut hairstyles, mama-kind women in their deep-cut overalls exposing cheesecloth covered chests. The tractor passed all of them. John imagined their smell, underarms warm since five am, worked-earth underneath fingernails, trails of sweat. These were the people he hoped would come and watch him, give him a dollar for eating bear meat.

Three years have passed since I wrote this first draft. I’d forgotten the specifics of the paragraphs but it was instantly familiar: this is my current manuscript. The voice, style, rhythm, the near-cold and standoffish observations. In this short story is me learning another side of my writing. Perhaps this was me returning to that side after writing in the first person for so long. 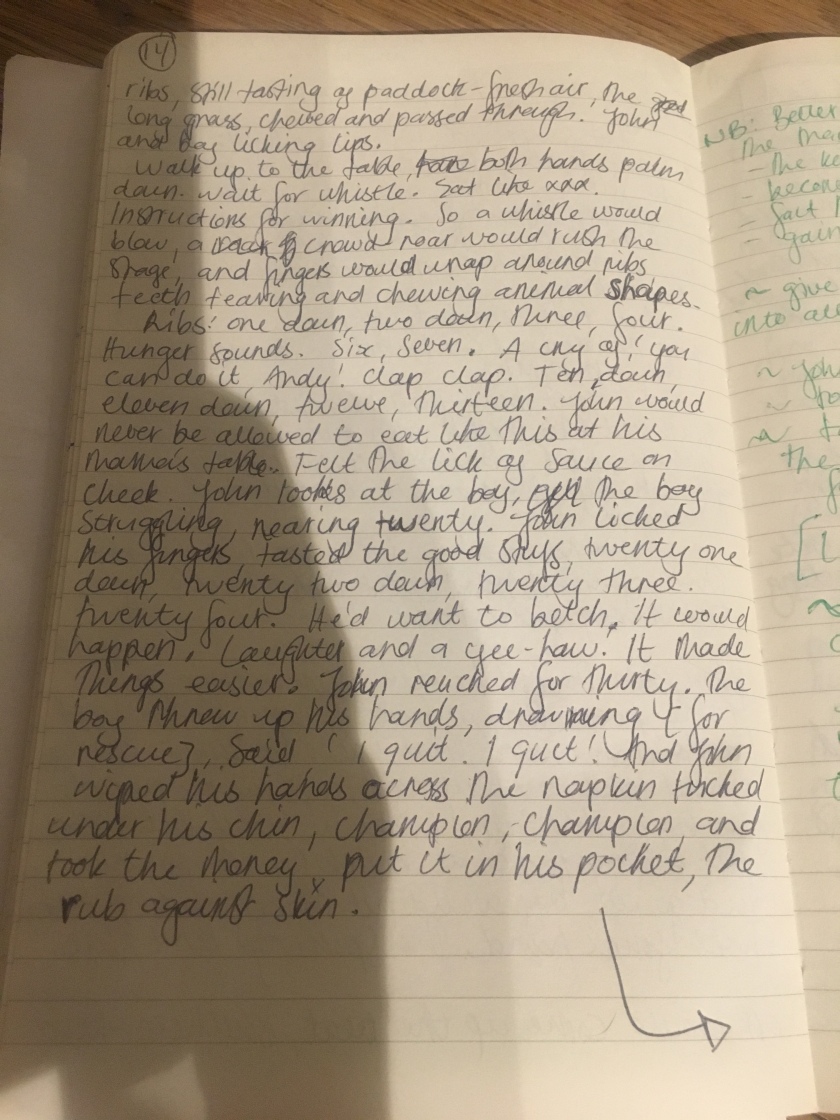 I hadn’t known it then but this burst of energy and love for this story in early 2016 was part of the foundation of a bigger idea: novel two. Because beyond the voice, there are several themes that I’m clearly drawn to in this short story that are now repeating in the current manuscript. I realised tonight that the strange assurance I felt about how I might use narrative voice when I began the second novel was only able to feel like gut-instinct because I’d already had a practice run.

But then: where did the voice come from in 2016? What had I rejected months, years earlier while in the beginning, the middle, the endlessness of See What I Have Done that made it possible for me to approach it? Our creativity is the product of what is both realised and what is rejected. Our creativity is the product of accepting ideas come and go. Sometimes they stay, more often than not they go to someone else. And sometimes they return to you wearing a mask.

Tonight, sitting with the farm boy to my left and my manuscript on my right, I can see the inherent flaws in the early version of the short story’s structure, can see what this story should do, the new choices I’d make based on the last three years of growth I’ve made writing something new. I feel excited and I’m thinking I’d like to redraft it, submit it to a journal next year, maybe even send it to my agent as a possible future side project.

Knowing me I’ll attempt a rewrite and put it back in the wooden drawer. Maybe it’s because of guilt, maybe it’s boredom. I suspect some things are never meant to be completed, that they simply exist in order for something better, something stronger, to manifest. 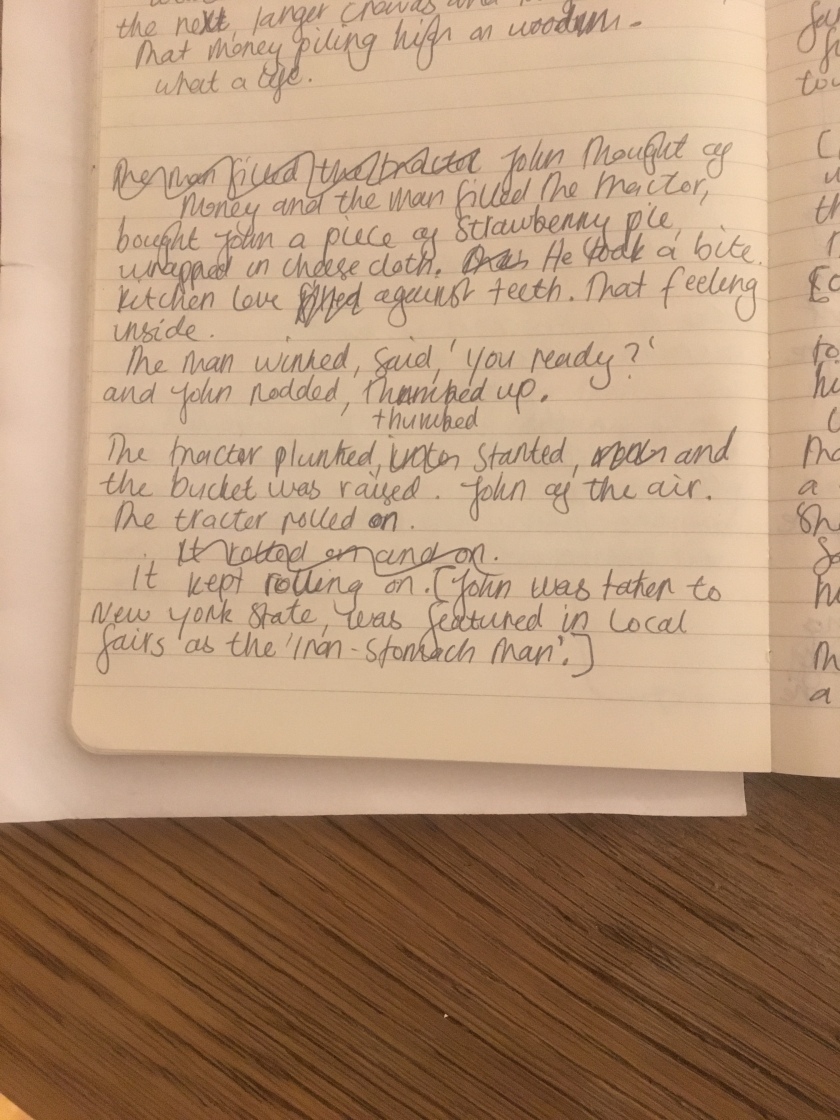