1 a: exaggerated or affected adherence to a particular style or manner

At the beginning of the year I was in London and trying to enjoy a short break from writing. By this stage I was completely over my novel-in-progress and couldn’t move myself away from the feeling that what I am writing is not only irrelevant and derivative but is already a complete creative and personal failure. Upon reflection I think it’s safe to say these overly wrought and self-loathing thoughts were partially a manifestation of creative exhaustion and so the decision to take some time away from characters and words and emotions was probably a correct thing to do for a little while: nothing helpful can be gained from telling yourself something you’re in the middle of creating is a steaming pile of dog shit.

And so to London. A few weeks into my ‘I’m not physically writing or even thinking about writing for at least a month because I can function fine without that shit and anyway I’m super tired’ was going well until it wasn’t. The first thing I noticed was the quality of my dreams. They were vague, unmemorable. For someone who mostly experiences very vivid (often colourful dreams), this was unsettling. Throughout the day black and white pieces of the dream would come to me but they were so small I wasn’t able to glue them together and make a narrative. It has always been my superstition that if I can’t remember my dreams I’m in trouble creatively. The next sign that things weren’t going well were my feelings of being too big for my mind and body, that I was growing so far out of the boundaries of my bones and grey matter that I was feeling claustrophobic. At this stage of my life I know all too well that this happens when I need to release thoughts and feelings, to create something.

Obviously the logical solution was to start writing anything down to feel better. But I had made a commitment to not-writing and my occasional tendency to be stubborn had well and truly kicked in.

The best solution I had for myself was to go see some art and soak up other people’s creativity and keep it all in the memory bank until it was time to write again. The first place I went to was the Victoria and Albert Museum.

After walking around for a few hours trying very hard not to think about writing and how every bloody thing I saw was inspiring me, I found myself in a room filled with extremely old and expensive fancy tableware and hideously ostentatious home decor. I was relieved. Nothing here would tempt my need to write.

Then out the corner of my eye I saw this: 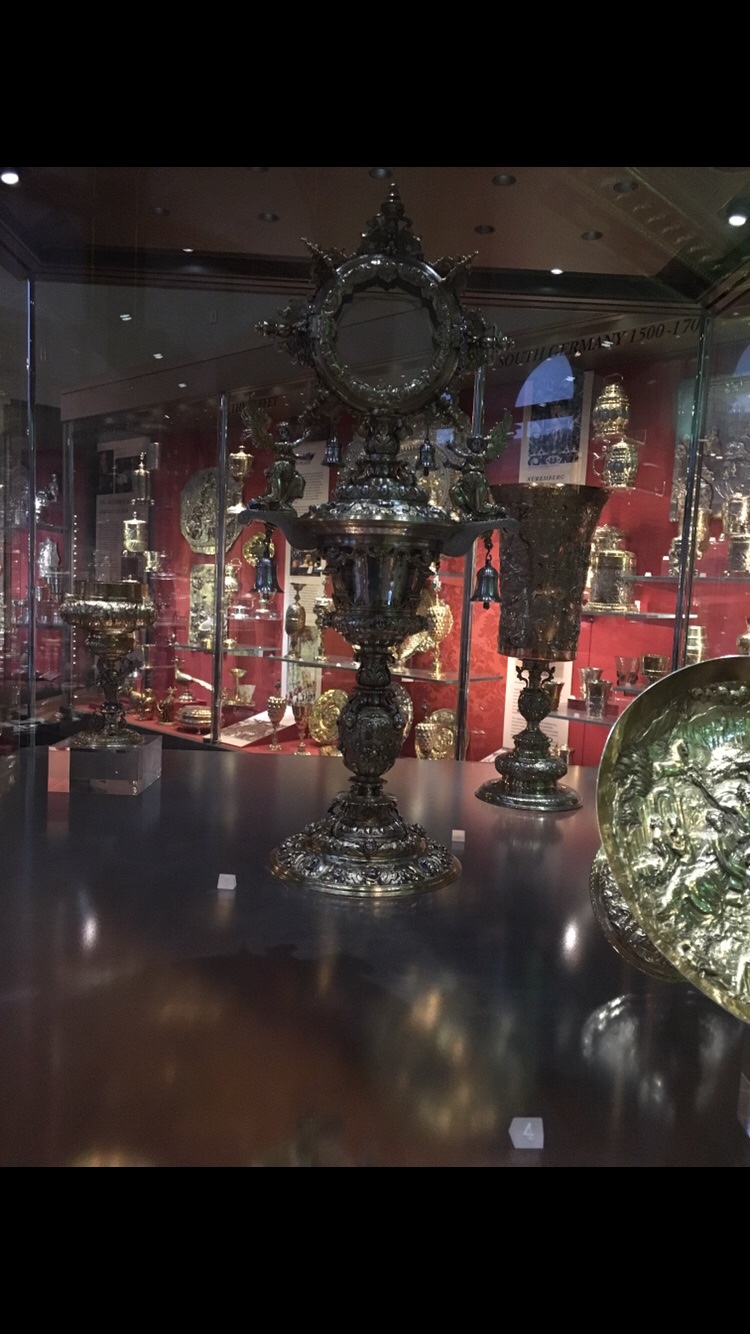 I found it both grotesque and fascinating. I went a little closer to examine it in more detail. That’s when I noticed a little plaque nearby that told me this was a piece from the Mannerism movement. I love art but I’m no art historian. Up until that point I hadn’t known that Mannerism was even a ‘thing’. I now know that the paintings I used to refer to as the weird but intriguing, OTT Renaissance stuff is actually from the Mannerism era of 1520-1580.

But there was something else. Encountering Mannerism in that very moment gave me a feeling of déjà vu. I felt motion sick. I needed to leave the museum immediately. On my way out I noticed a small sculpture of Prometheus, took a photo of it, and thought about the past.

And so the past:

When I was twelve I dreamt I owned a race horse called Mannerism who I adored but was considered an outside chance to win anything. In the dream I was constantly knee high in mud and at some stage I was ordered not to go near my horse for fear I would contaminate her. I felt utter shame. It was then that I realised I didn’t own Mannerism but was in fact the stablehand. My life wasn’t what it seemed. Eventually the day came that Mannerism was to start in her first race and so I went to the grounds to be with her, to show her I was there. But my legs were once again mud stained and I was forbidden to go near her. So I watched the race on a small screen in a crowded room which had green carpet and cigar coloured walls, the noise of punters screamed my ears and I could smell the filth of my pants but didn’t know how to take them off. The race began and Mannerism was in the lead, kept her lead and she won. Men in the room danced on their toes and as I started to feel joy I woke from my dream, opened my eyes to the pitch dark of my bedroom and said, ‘Mannerism. Don’t forget Mannerism.’

This is one of my most vivid dreams I’ve carried with me from my childhood and I often revisit it in order to understand where it might’ve come from and what, if anything, it means. But I’ve never arrived at anything satisfying. Over the years the word and meaning of mannerism has popped up in various forms for different reasons, especially when I’m writing, and every time it does I think of my dream horse. It was only after the encounter at the V&A that I considered for the first time the significance and symbolism of the opposing feelings of the dream: joy and shame.

Later that night I was scrolling through photos I’d taken that day and came across Prometheus. Looking at him, I heard a possibility of a story inside my ear, and despite myself I couldn’t help but write the following: 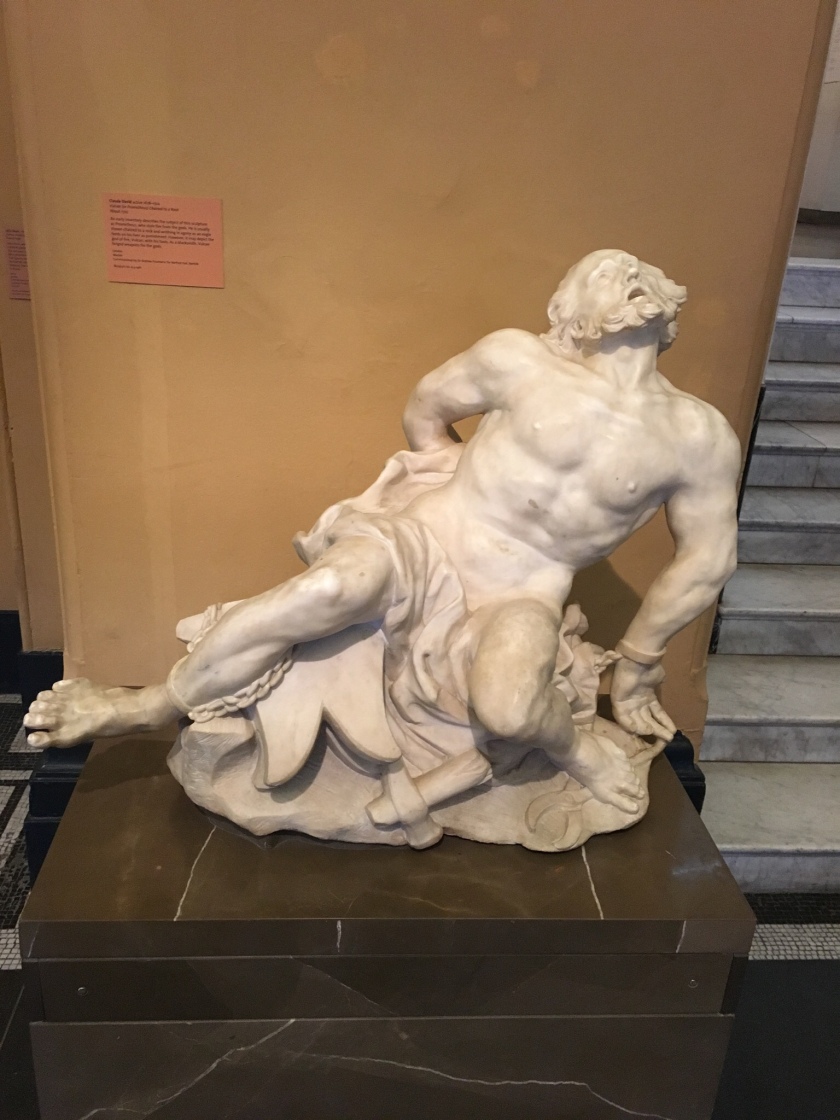 Over the hill break animals; bones as maize. All you shepherds come closer, sob your losses. ‘I cut the last lamb,’ one said, hung head. Hunger does terrible things.

There it was: a hint of shame. As soon as I started writing, the story became quiet and in that moment I didn’t have the energy to chase it. But the act of writing that short piece instantly calmed me, reduced me in size a fraction until I felt comfortable in my body. I knew this meant my break from writing would have to come to an end because this comfort would be temporary if I didn’t.

London and the writing break were over weeks ago and I’ve been back at the novel slowly willing it to tell me more of what it needs. But I can’t stop thinking about Mannerism and the reasons we dream, the significance of what we dream.

What can past dreams tell us about our future projects? What exactly are we returning to when we remember dreams?

Around one to two years ago I got the strong sense that I’d like to write a future novel which explores the themes of shame and guilt. I wrote the idea down so it wouldn’t stray too far from me while I continue writing novel two however I’ve had to revisit it in light of the remembered Mannerism dream and it’s symbolism of joy and shame. What does the dream know that I don’t yet?

I’ve started learning more about the Mannerism era and the idea of spatial incongruity and excess. Paintings from this period often show the moment before the action takes place and are a reaction to the late Renaissance by breaking the rules or exaggerating concepts. It’s why so many of them are just so bloody weird: they use rich colours and careful details but when you look closer you notice that things are off and slightly distorted. Things aren’t harmonious or conforming and are inconsistent with themselves. Space is strange, bodies are exaggerated, settings are sometimes unclear. All of this is a deliberate style to attain the ideals of’properness’ or perfection.

And then there are dreams. We now know that dreams may help the brain deal with trauma as it rakes over our memories and processes events. We also know that there are two types of dreams: REM dreams and Non REM dreams. One type allows us to practice emotion and the other strengthens our memories.

And so I come back to this: what can past dreams tell us about future projects?

What is clear now is that the encounter with Mannerism and Prometheus brought back a memory of a dream and inspired a short burst of writing that eased my feelings so I could fall back in love with my current novel-in-progress and finish a draft. But it is also clear that the past and future are colliding and that my present self needs to listen and explore this collision to make sense of it, to create something new.