Previously I told you about Bridget’s inclusion in See What I Have Done as a narrator, told you the way your manuscript changes over time can be a miraculous thing. This beast of words that has shape shifted so much over the years has been able to adapt, in various degrees of success, to whatever ‘new visions’ I had for it.

I think I’ll continue the theme of process and drafting, especially as the Australian publishing date of See What I Have Done draws nearer (and as I try to wade through the thicket of mush that is the new manuscri ptwhich is making me have all kinds of self doubt). This post is one of a many I’ll probably do about Emma Borden, Lizzie’s older sister. I’m somebody’s older sister and so I thought even on a loose base level, I might be able to identify and draw out something from Emma, explore  that kind of relationship to a sibling, the way you become a protector.

Continue with the idea of people ‘confessing’ to Emma.

At the time the introduction of Emma as narrator was a year old – I’d started weaving her into the main fabric of narrators sometime around early 2011 (probably. It may have been mid to late 2010 but memory, as it does, alludes me) – and I was still etching out all her possible roles and uses as a narrator.
It became clear to me through different newspaper articles I had read that she might have been somebody who was used to absorbing the feelings of others. Emma, the vault. While people told her secrets, perhaps all she ever wanted was the truth from her sister. Would she ever receive it? As far as Emma the character was concerned, would I keep her historically accurate, use her as the reliable narrator and allow the ‘real life’ Borden case to funnel through her lens? OR was it better to continue what I had been doing, fuse reality and fictional reality together?
In the 29 December scene I had Emma and Bridget meet each other on the backstairs (this still happens in the final version of the book albeit a slightly different version of the conversation). Bridget confesses to Emma that the police have been questioning her and that she is going to leave the Borden’s employment. She also tells Emma that she heard Lizzie laughing on the front stairs earlier that day.

Bridget’s ‘confessions’ happened, just not in this way, not on the public record. But maybe it did. Maybe she told Emma things that day. Originally in the scene I made Emma imagine a secret sisterhood between Lizzie and Bridget, one that she was jealous of. On and On the scene went but in the end, not all of it rang true to the characters as they developed. So it was cut. Many many weeks and months of work, cut.

Not all was lost. Having Emma vault secrets meant she was capable of protecting her sister. Emma may not be that trustworthy after all. 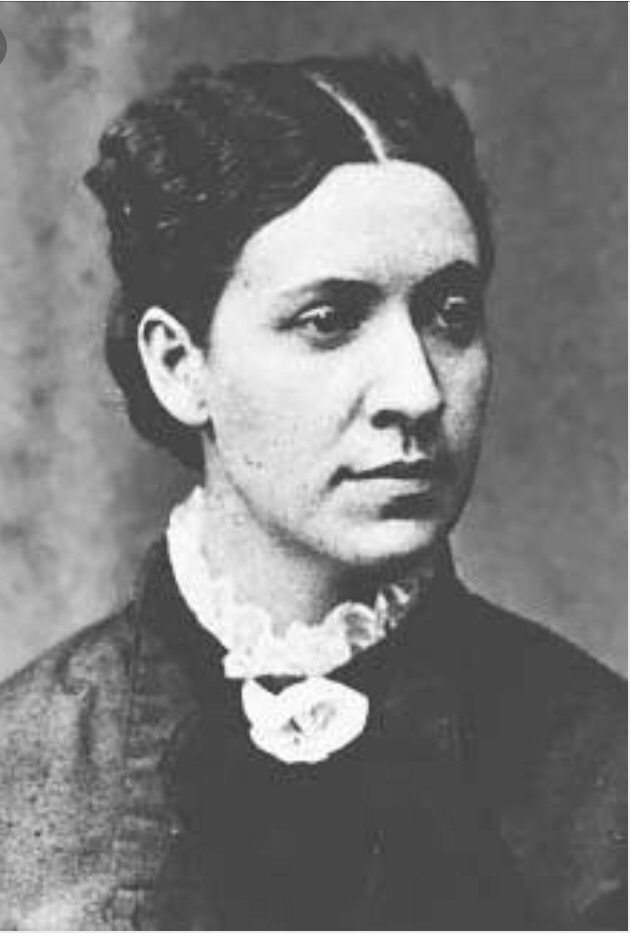 Above: Emma Borden, approx the era of the crime

Whatever was between the sisters ended in 1905. There’s endless speculation as to why they essentially ended their relationship, never speaking to each other again, and although I touch upon it in the book, it was never something I wanted to focus on. For me, the book was all about that day, that family, that awful entanglement of love.

Supposedly Emma gave an interview to the Boston Post in 1913 (I say supposed because it’s debated amongst Lizzie scholars whether this interview actually took place). When the article was published it was quite the sensation. I would read the article many times as I was developing Emma and it became a semi touchstone, something that proved a pattern I was trying to write about.

At the time, Emma was in a self imposed exile. Somebody somewhere claimed that Lizzie had confessed to the crimes. But here was Emma defending her sister once more, telling the reporter that her sister had nothing to do with the crimes. And yet. She said the strangest thing. When asked why she moved out of French Street she said ‘The happenings at the French Street house that caused me to leave I must refuse to talk about…I did not go until conditions became absolutely unbearable.’
Emma, the vault. That great protector.
If you’d like to know more about the 1913 article or want to delve head first into the case, I highly recommend you head over to lizzieandrewborden.com . Don’t solely rely on Wikipedia for this one.

But ask yourself this: am I someone who loves spoilers? Do I want to know what is true and what isn’t as I read See What I Have Done? If you do, by all means go at it and have a great time researching. But if you want to know nothing, let yourself become immersed in this reimagining of the case, resist temptation. Wait. Then go forth and see what you can make of it all.