First attempts at your novel are almost never right. The second and third attempt doesn’t fair much better but it gets closer. Everyone has false starts but the point is to write those false starts one word after the other and build on that,  see what you can make of it. You can’t be proud of something if you never write it in the first place. You also can’t be proud of it if you don’t revise or reimagine. At least, this is how I feel. But beginning’s are daunting. Every time  I start something new I have the same feelings and thoughts: I panic I won’t finish it, I fear the ugly work that will come, I worry I won’t get better as a writer, and there’s always little voice that tells me ‘You’re not good at this. Give up now. You’ve nothing to offer.’ I both dread and embrace the beginning of a new project.

But then I start. I’m very stubborn. I hate being told I can’t do something (especially when it’s me telling myself!) So I wrestle with the slumps, am overjoyed when it goes well. Then I get ready for the drafts (these have their own set of feelings but no need to go into that). I tell myself: I love these characters so much that I’m prepared to do almost anything to get their story down. I’ll rewrite and rewrite until I mentally can’t do it anymore. And sometimes that little voice will crawl into me again. But I persist.

I have lost count of the drafts I wrote for See What I Have Done. Over the eleven years it took me to write the book I know there would have been at least twelve drafts (more. I know there was more). Some drafts changed dramatically, while others very little, perhaps only a narrator’s storyline was drafted, perhaps the draft concentrated in building the mood of the manuscript. In hindsight I know I wrote this book in the worst possible way. But living, learning.

I was terrified and overwhelmed when I began writing Bridget as a narrator into the novel (she was once a peripheral character. Now she’s probably my favourite part of the book). Want to see me at my most vulnerable on the page? Here are some Bridget excerpts from various stages of drafting, right to the finished page. Much of what I wrote never made it into the manuscript that was submitted to publishers, let alone the final version of the book. But writing passage after passage of false starts helped me shape the character and allowed me to strategise how I would use Bridget in the book.
The very first day:

As you can see, it’s not particularly interesting, not even particularly good writing but each day I sat down with Bridget, her voice shifted into her own and I started getting a better sense of how she might have felt about the Bordens and what she might know about the family, the secret things.

Eventually I began writing actual scenes. Here is the first attempt to write the ‘winter lock in’ that eventually made it into the final version:

I worked this draft a few times. When the manuscript went out to publishers, this is what the scene looked like: 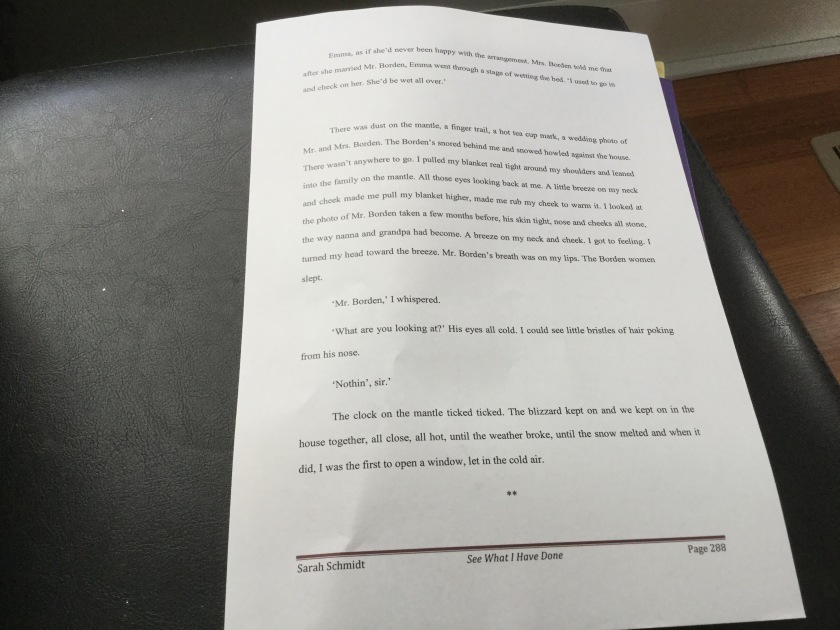 Once I sold the manuscript I went through a whole year of edits and a bit more rewriting. This is what that fragment of the scene looks like in the uncorrected proof version: 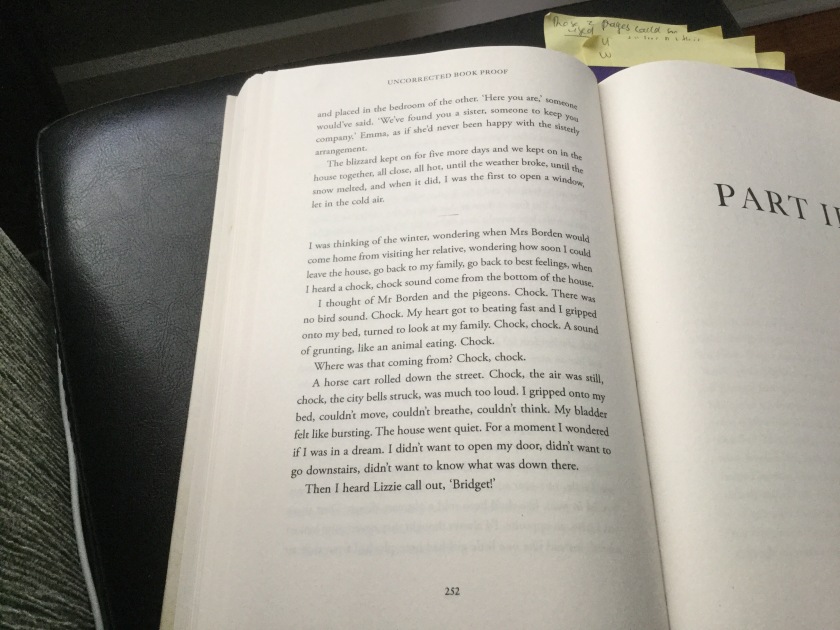 Could I have kept going, kept revising and reimagining? I’m sure I could’ve. I’m sure some readers out there will think I shouldv’e scrapped the whole thing. Maybe maybe not. But this is what the book is. I’m taking what I learnt about See What I Have Done and using that knowledge for my second novel, discovering what type of writer I’ve become, where I might go next.