My mind is a rush. For weeks I’ve divided days into categories: See What I Have Done and Blue Mountain. I find it difficult to generate new scenes or ideas for Blue Mountain on any day I need to deal with Lizzie. It’s emotionally and mentally tiring to have to deal with all those characters while they congregate in the same place. Which is frustrating because right now I need to be working on both.
I moved on from See What I Have Done around August last year. Although I was knee deep in edits and still had proof reads to look forward to, I’d fallen in love with a new novel that germinated from a strange dream I’d had years before and which had been waiting for me to come back to it when Lizzie was done (yes, I’m aware I’m beginning to hang a lot of respsonbility on dreaming for writing but whatever). Suffice to say, I got shitty when the Bordens interrupted my dates with Blue Mountain. But on we’d go and it was happiness to be able to write about new people and new situations. It was also frightening.

When you work on something over and over again you forget what a beginning is like. You trick yourself into thinking that first drafts (or in my case draft zeroes) come out fully formed and need only a few minor tweaks. So then you write and what comes out is somewhere between potential and utter shite, and you remember all the first drafts you’ve ever written (not great) and confidence begins to drain. You begin to think that you can’t do it, that actually, the craft of writing is now too hard for you to even comprehend and while it is absolute euphoria when your project sings it is equally excruciating to sit there and write and have nothing come out, make you feel like you’ve never written a sentence in your life.

I find that once I get in a rhythm the frightening days become fewer (or is that less? See, this is why I did terribly in editing at uni) and while not always fantastic writing, I can see where I can take the next draft. So by now you might be thinking, ‘But Sarah, you’ve been working on your new novel full time for a few months now. You must be banging that first draft out.’

Which brings me back to my rush mind. Now, I didn’t intend for this post to be yet another long winded saga about the writing process. On the contrary. I wanted to show you a dead possum. But before we get there you need to know my current frame of mind: a confusing mess of novels. I sit down to write and the old and new fight for attention. And it’s not a pretty sight. Often the writing and narrative and characters in Blue Mountain come out on the page and make no sense (literal no sense. I can barely read my own writing lately) and before I can iron the crinks out, get over myself and get on with it, I am asked to (and I am very happily to do so, I should add) do something for See What I Have Done and I have to abandon the novel for the day or week and that frightening first draft panic lingers.

Last week, in an effort to solve these feelings and take control over the situation, I did what I always do and went for a thinking-walk to sort out  my issues. Admittedly I was also on a mission to find something ‘inspiring’ for character work that would help get the writing juices flowing and thus first-draft-glory would all be mine.

At first I wondered if the possum had fallen, had saved itself with a flick and grab of tail. I went closer. When it didn’t move, didn’t flinch as I approached, I realised it had crossed powerlines, that it was dead and that it had probably been swift. I couldn’t believe what I almost missed because I was feeling sorry for myself.

This jolt from the unlikely, the reason to always look up, to look outward.

I stood there awhile, took it in. There was something in this. I went home immediately and started writing, got to work. It felt great.

My curiosity. Sometimes I’m ashamed of it. My first thought on waking the next day was: is the possum still there? I got up, went to it, and there it was, tail still clinging and I noticed that overnight decomposition had made small changes, had bloated a stomach, had fattened fur. What if it were to drop? The wind picked up, gave a little knock on the body. I waited. Nothing. The small changes that had occurred. Thoughts returned to the novel. Right there in the street the little scene I had written yesterday was beginning to transform. I could see how I’d develop it, what I wanted my character to do, who I wanted her to become. Small changes, like that belly, that fur.

I went home, took to work. That afternoon I had to return to See What I Have Done but I wasn’t phased that I had to abandon Blue Mountain. Just like that possum, I knew it would be there when I got back. 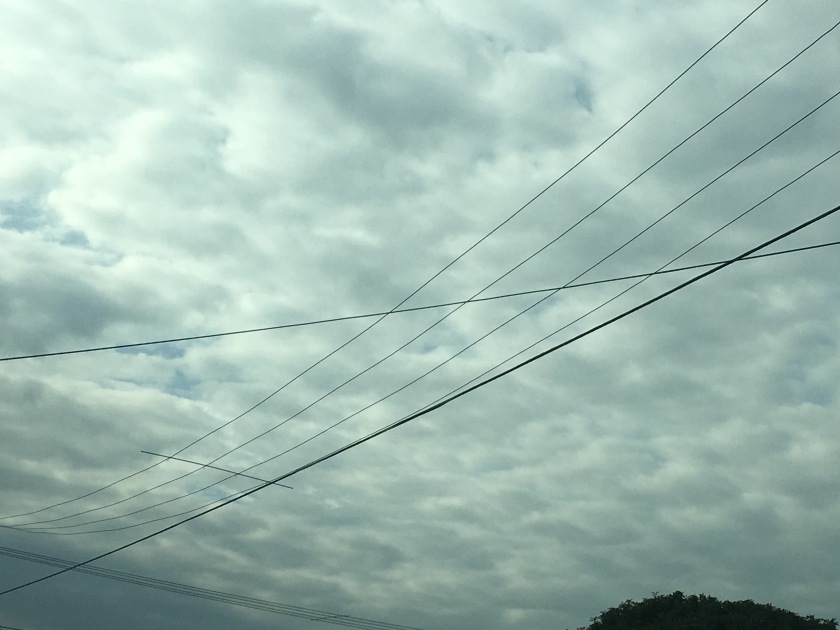 I didn’t get a chance to go to the possum for two days. On the third day I went to the spot, looked up. Gone. A major change. I was disappointed, if only because I wanted to know how much longer the possum could stay there, how it would change from day to day. When had it been moved? The fourth day? The fifth? Just before I arrived? It was clear I hadn’t been the only one to look up.

But here’s the thing. Since the possum, not once have I  panicked  about going back day after day to the inevitable beautiful-ugly first draft mess that’s waiting for me, haven’t panicked* about juggling the demands of two novels that are complete opposites: finished, beginning.

Don’t be surprised if a dead possum on a power line appears in Blue Mountain. And if it does, you’ll know how I was feeling when I wrote it in.
* I may panic later.